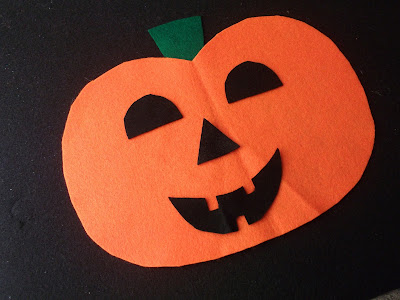 I found this story while searching for a felt board story to teach in preschool. I created a felt pumpkin with a jack-o-lantern face that changes with the different feelings that Kippy talks about in his story. He talks about three feelings; happy, sad and scary. I hope you enjoy this story and have fun reading it with your little one. 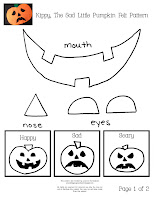 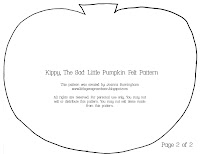 On a hot summer day, the sun shined his sparkling light on a late-blooming flower sprouting from a pumpkin vine.
"Hmmm" thought the sun, "that one will never be worth a nickel. There's not enough growing time left for him."

Pumpkins do take some time to grow, you know, and it was already late in the summer. The earlier pumpkins had a beautiful orange glow; every time the farmer looked at them, he got hungry for homemade pumpkin pie with cinnamon sprinkled on top.
The little flower held tight to the vine and hoped with all his heart that he'd grow up big and round like the other pumpkins.  The farmer made sure he got enough water and the sun kept him warm.   Before you could say "jack-o-lantern," Kippy, for that was his name, had become a tiny pumpkin.   He looked all around him and saw many big, round pumpkins, all ready for picking.   Kippy knew he could never catch up to them, no matter how hard he tried, and he hung his head and tried to hide under the leaves of the vine.
Before long, summer turned into fall and still Kippy hung his head, feeling sad and wishing he could grow big like the other pumpkins.
Finally it was Fall Fun Day at the Pumpkin Patch.   Boys and girls, Moms and Dads trekked down the winding path to the pumpkin patch, looking for the best pumpkins.   Kippy squeezed his pumpkin eyes tight, trying not to watch as one big pumpkin after another was chosen.   Dads left, carrying heavy pumpkins that Moms knew would make the yummiest pies.  Girls and boys called out to each other excitedly as they chose their own special pumpkins.   Kippy shivered when he heard the children talking about carving scary faces on the pumpkins for halloween.
He thought to himself, "I'd like to have a face, too, but I don't want to scare anyone.  I'd like to look happy, not scary."   But Kippy wasn't happy at all.   He was the littlest, saddest pumpkin in the whole pumpkin patch.
Suddenly, Kippy heard a wee little voice saying,   "That one, Mommy!   I want that little pumpkin--there!--under those leaves."
Sure enough, the youngster had spotted the sad little pumpkin hanging its head.  Kippy could hardly believe his pumpkin ears!
When the little fellow's Mom put her soft hand around Kippy and twisted his stem to free him, it kind of tickled and Kippy couldn't keep from giggling a little giggle.   Then he looked up and saw her smiling at him as she cradled him in her hand.   He peeked out from between her fingers to see the little boy.   He was so small and thin! Kippy could hardly believe his pumpkin eyes!    The boy was a lot smaller than the others, just like Kippy!   When he saw the happy smile on the small boy's face, his little pumpkin heart began to throb with joy!
"Mommy, I want to hold my pumpkin,"    the little boy told his mommy.   I LOVE my pumpkin!"   He reached out his arms and lovingly took Kippy from his mother and cradled the happy little pumpkin close to his heart.  Kippy knew that his boy would not want him to be a scary pumpkin. Hisboy would give Kippy a bright smile like his own and Kippy, too, would bring happiness to all who saw him.
And that's how Kippy, the saddest little pumpkin in the pumpkin patch, became the happiest pumpkin of all. 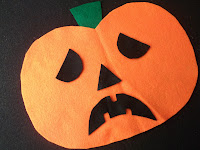 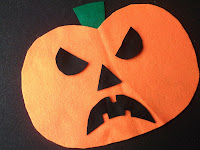 Skip to my Lou

What is a Mormon?